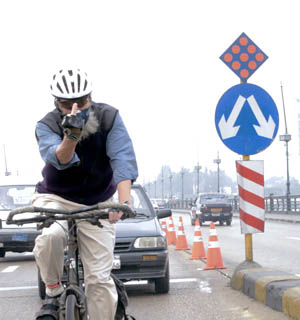 Authorities are warning this morning of a new threat to the safety of Cairene motoristsâ€”angry hippies.

â€œWe think theyâ€™re coming from California,â€� confided Mohamed El Jalaad of the Traffic Safety Division of State Security. â€œItâ€™s the sandals that tip us off. But do not worry. We will crush them beneath the wheels of our Jeeps.â€�

While rumors of steadily rising face-mask sales continue to circulate, pedestrians are being advised to take care in crossing the road.

â€œThese angry hippies can be dangerous,â€� says taxi driver Ahmed al Soua pointing to mark on the side of his cab. While he says he wasnâ€™t really watching, he thinks the mark may have been caused when he sideswiped a Deadhead on a mountain bike.

Meanwhile Shabaan Abdel Rahim has announced that he will be releasing a song next week entitled â€œSquash the bearded freak under the wheels of your Lada.â€�