I really wish that they didn’t bother with that ridiculous trial and just killed him when they found him, as they did with Uday and Qusay Hussein. And so much for those people who predicted an endless appeal process.

I do regret, however, that more information was not obtained out of Saddam Hussein. About his life, his regime, his relationship with various countries. He would have been a fascinating source of information for regional historians. A real trial, at the International Criminal Court, the Hague or elsewhere, would have yielded real, valuable information.

The Telegraph has an interesting account of the hanging, although it’s not clear whether it’s first-hand or not. Angry Arab has an interesting, long, paragraph break free rumination on Saddam’s death, including some well placed criticism of al-Jazeera’s melancholy coverage (it was also poor coverage, they got the news late since they are not allowed to operate in Iraq officially). I really tire of seeing, as I did in the Nasserist Egyptian rag al-Arabi a few weeks ago, odes to Saddam Hussein “al-batal” (the hero.) It’s pathetic. I hear Abdel Bari Atwan did something similar a few days ago. What is it that Arab “nationalists” and some leftists have for other Arab countries’ dictators? Probably simply that over the years many of them took money from them.
I’m off to read Neil MacFarquhar’s long obit in the NYT… 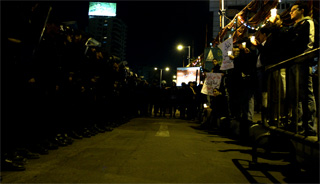 A State Security Major told me this evening that sometimes these demonstrations get violent, which explains why the park in front of Mustafa Mahmoud mosque had to be sealed off with three truckloads of riot police and a couple of gangs of stick toting beltagaya tonight. “The Muslim Brotherhood sometimes comes,” he told me and gave me a knowing look.

While the two dozen mostly-familiar faces who showed up to stand for an hour and commemorate the first anniversary of the night that similar troops beat to death 28 people, including seven children, in the park didn’t get too rowdy, it was good to know that reinforcements were close by just in case.

Click on the picture below (of Police Captain Islam Nabih, who tortured and sexually abused driver Emad Kabeer) to read the latest updates on the case… 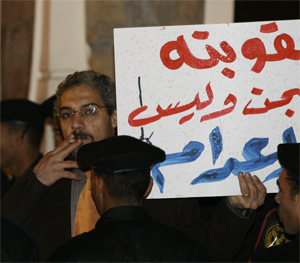 Nasty weather for demonstrating tonight, but around seven o’clock this evening there were half a dozen Ayman Nour supporters stamping their feet and yelling nasty things about State Security in Midan Talat Harb. Three trucks full of soldiers watched from the other side of the street and the usual array of nice young men in government issued polyester casuals were tucked into the shadows around Groppi’s in case there were any women who needed to be beaten.

Syrian Ambassador to the US Imad Mustafa has a blog. He likes Syrian contemporary painters — who are quite good. I hope he puts up some recipes, Syrian food is tasty.

“JERUSALEM – Israel has approved a new settlement in the West Bank to house former Jewish settlers from the Gaza Strip, officials said Tuesday, breaking a promise to the U.S. to halt home construction in the Palestinian territories.”
Great news! The officer who tortured and sexually abused driver Emad Kabeer will be prosecuted.

But that will not end the practice. Those are not just “few rotten apples.” Mubarak’s policing system is classist, abusive, unprofessional and repressive. Still the campaign launched by the Egyptian bloggers and the independent press was strong enough to push the regime to start investigating the case. This sends a powerful message to anyone who’s involved in torture: Your victims will not be silent any more…

Egypt prosecutor detains officer accused of torture
26 Dec 2006
CAIRO, Dec 26 (Reuters) – An Egyptian prosecutor ordered the four-day detention of a police officer accused of sexually assaulting a prisoner, judicial sources said on Tuesday.
They said prosecutor Bakr Ahmed Bakr questioned assistant-investigation officer Islam Nabih on Tuesday. He also ordered the detention of Reda Fathi, a non-commissioned officer, for four days.
A video circulated on Egyptian blogs last month and sparked uproar. It showed Imad al-Kabir, a bus driver, lying on the floor, naked from the waist down, with his hands bound behind his back and his legs held in the air.
He screams and begs as he is sodomised with a stick while those around him, whose faces are not visible, taunt him.
Kabir’s lawyer has said the torture took place in January 2006 in a police station in Bulaq al-Dakrur after Kabir was detained and beaten for intervening to stop an argument between the police officers and his brother.

“My Name is Rachel Corrie” has been cancelled in Canada. No surprises as to why:

Jack Rose, from the CanStage board — while admitting he has neither read nor seen the script — said that “my view was it would provoke a negative reaction in the Jewish community.”

And philanthropist Bluma Appel, after whom CanStage’s flagship theater is named, concurred. “I told them I would react very badly to a play that was offensive to Jews.”

I saw the play in New York — where it had been moved from the original theater it was scheduled to play to the Mineta Lane Theater — and don’t see what was deemed offensive about it aside from that it brings attention to the plight of Palestinians and the murder of a pro-Palestinian activist.

But of course the power of the “lobby” is a figment of anti-Semitic imaginations.

The economic side of Lebanon’s current crisis is examined at the Nation:

But in most conversations with people at the sit-in and protests, economic concerns quickly emerge: Siniora’s government is corrupt, has failed to reduce Lebanon’s crippling $41 billion public debt and has done little to improve people’s lives. Shiites are especially forgotten in the country’s economic planning. Many at the sit-in have been out of work for years, or lost their jobs after the recent war.

“Our country is getting poorer, and Siniora’s government is not talking about it,” says Hadi Mawla, a 22-year-old graphic design student who came from the dahiyeh on the protest’s first day, which drew hundreds of thousands to downtown. “Our standard of living is falling, while other Arab countries are improving. We Lebanese used to make fun of other Arab countries. Now they have great big cities like Dubai. And we’re going to end up like Egypt–with a very poor class, a very rich class and nothing in between.”

Nice to see the crisis being covered beyond the political element — at that dig at Egypt is rather amusing considering that the Egyptian government is always warning that it is afraid it will end up like Lebanon!