Ikhwanweb: Farouk Al-Sharaa described the Saudi role in the region as “paralyzed” while he backs Iran . How do you expect the balance of power in the region will be if a change happens and an interim government takes power in Syria ? What about the Iran-Syria coalition? will the interim government maintain this coalition or will it seek a coalition with neighbouring Arab countries?

Bayanouni: First: Farouk Al-Sharaa’s statements reflect the regime”s confusion and isolation from its Arab context. It has become an instrument in the hand of the Iranian politics. The Iranian-Syrian coalition is not a coalition of peers. It is a coalition between a strong country that has its own project in the region with a weak regime that lacks legitimacy, does not have a popular basis and it doesn”t have any national project. Therefore, we warn against the ongoing policy of being controlled by the Iranian politics. As for our future outlook, we aren”t against forging coalitions with Islamic states, including Iran and others, as long as it is based on common interests, not like the current state. The coalition with Iran in Hafez Asad”s era had to a great extent kind of balance between Iran and Syria because of Hafez Asad”s personality and his political capabilities. At present, with Bashar Al-Asad”s weakness and lack of any political project, the Syrian political stance is unfortunately a part of the Iranian stance. In the future, a priority should be given to cooperation and coalitions with Islamic and Arab countries, coalitions which should be based on mutual interests, and not to be a part of strategies others.

Needless to say, this is complete bull and an obvious and pathetic attempt by the barbaric Sudanese government to get another negotiating card as it heads into yet another round of talks on Darfur and the South. Memo to the Mufti of Egypt, Sheikh al-Azhar and the Muslim Brotherhood: now’s the time to speak up against this kind of politicization of Islam that embarrasses us all.

Despite her colleagues insisting it was an innocent mistake, Sudan’s deputy justice minister confirmed yesterday that a charge had been laid. “The investigation has been completed and the Briton Gillian was charged under article 125 of the penal code,” said Abdel Daim Zamrawi, speaking to the official Sudan news agency in Khartoum. “The punishment for this is jail, a fine and lashes. It is up to the judge to determine the sentence.”

Some analysts saw ulterior motives. There are tensions between Britain and Sudan over the conflict in Darfur. In a Guardian interview this month, President Omar al-Bashir expressed anger at the threat of UK sanctions against Sudan if peace talks failed.

Mudawi Ibrahim Adam, a prominent peace activist in Khartoum, said: “This was an opportunity for the government to distract people from the main issues in Sudan: the problems between the authorities in the north and south of the country, the conflict in Darfur and the question of letting in United Nations peacekeepers.”

There were reports yesterday of pamphlets being circulated in Khartoum calling on people to protest against the teacher after Friday prayers. But many people seemed to take her side. Muhammad Kamal Aldeen Muhammad, a 20-year-old student, said it was clear that she had not intended to insult the prophet. “All she was doing was trying to help her students. The government is looking at this purely from an Islamic perspective.”

Reading the New York Times’ editorials on Annapolis, full of praise for “moderates” and worrying about who shook whose hand, I am reminded of why I barely read that newspaper anymore. The reporting is occasionally good, such as the very nice long feature on radicalism in northern Morocco a few days ago, but when it comes to Israel just forget about it. This piece for instance quotes, aside (current) US officials, Martin Indyk, Dennis Ross and John Bolton. Never mind the jovial hamster and his bosses.

I mean, is there anything more to Annapolis than providing a mechanism for boosting Mahmoud Abbas while keeping the Palestinian Authority subservient to Israel and the US, thus isolating Hamas and preparing the ground for booting it out of Gaza? And in the meantime recreating the illusion of a peace process Palestinians will never credibly endorse while divided and many in the Israeli political establishment (and certainly the current ruling coalition) have no intention of ever finalizing? Or am I missing something? The NYT could celebrate that if it wanted to, but enough with the bullshit.

(Most links through Angry Arab.)

“Politics is the ordering of the household or the city as they ought to be according to the requirements of ethics and wisdom so that the multitude could be made to follow a path leading to the protection and preservation of the species.”

Mitt Romney, who increasingly appears to be the likely Republican candidate for the 2008 US presidential elections, doesn’t want Muslims in his cabinet. He has given at least two reasons, both outrageous:

TPM Election Central has learned that at a private fundraising lunchleon in Los Vegas three months ago, Romney said a second time he would probably not appoint a Muslim to his cabinet — and on this occasion, he made other comments that one witness described as “racist.”

The witness, Irma Aguirre, a former finance director of the Nevada Republican Party, paraphrased Romney as saying: “They’re radical. There’s no talking to them. There’s no negotiating with them.”

The new accounts provided by the witnesses lend credence to the now-notorious account of a more recent private Romney event that appeared in the Christian Science Monitor yesterday that already caused an uproar. In that account, a Muslim businessman, Mansour Ijaz, claimed that Romney had said that based on the “numbers of American Muslims” in the country, “I cannot see that a cabinet position would be justified” for a muslim.

So basically he believes that all Muslims are radicals, and thinks minorities that don’t meet a certain threshold should be barred from cabinet or other senior positions. The percentage figure for Muslims in America goes from 0.5% to 1% of the population. 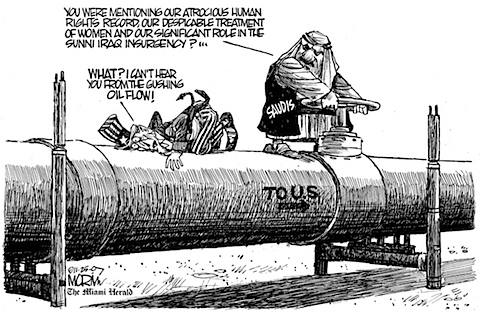 Via the always useful friday-lunch-club.

I have recently been using a combination of del.icio.us and a WordPress plugin called Postalicious to generate a daily list of my bookmarked links. As many of you may have noticed (unless you have more intelligent browsers than mine), Arabic script comes out as gibberish. If anyone knows a solution to this, I’d love to hear it.