My article about the confiscated graphic novel “Metro” came out in The Review, the weekend cultural supplement of The National, a new English daily based in Abu Dhabi. Below is the opening paragraph. You can see translated panels from the novel at Words Without Borders.

In a pivotal scene in the Egyptian graphic novel “Metro,” a blind old shoe-shiner stumbles upon an anti-government demonstration in the streets of Cairo. “Where can the oppressed find justice? Where can the hungry find food?” chant the demonstrators. The old man, almost without realizing it, starts mumbling along. A few frames later, he’s being carried on the shoulders of the demonstrators, having improvised a choice slogan of his own. A few frames further on, he’s being beaten by a gang of those young thugs routinely employed by the authorities to break up demonstrations. In two pages, the author of “Metro” has suggested the appeal and hopefulness of recent democracy movement in Egypt, as well as the severe consequences of any political activism.

Egypt recently passed a new Child’s Law. One of the most controversial parts of the law was the criminalization of female circumcision, or FGM. I just did a story on this for yesterday’s edition of The World.

One things I discovered is that while the figure that’s commonly mentioned is that 96% of women in Egypt are circumcised, the figure for teenage girls is about 80% and they project (from government health surveys in which they ask mothers whether they plan to circumcise their daughters) that the rate for young girls will be 60% by 2015.

The Muslim Brotherhood made a big fuss over this law when it was discussed in parliament. One MP brought his circumcised daughters and wife to parliament as an argument for FGM. I had read about this and went to interview Saad Katatni, the head of the Brotherhood’s parliamentary block. He was much more diplomatic with me than his MPs had been in parliament. He actually said he recognizes that FGM isn’t required by Sharia. But he said it shouldn’t be banned because in some “exceptional cases” it’s needed. Pressed on what those exceptional cases might be, he said they were when the organ (he meant clitoris) “طويل طولا شاذا”, meaning “is perversely/abnormally long.” This harks back to the popular belief that female circumcision is necessary for some women whose clitorises otherwise would grow to a monstruous size. When I asked Katatni about the death of Budur (the schoolgirl who died last summer while undergoing FGM), he said isolated cases shouldn’t lead us to condemn the practice completely. He said: “If I as a doctor makes a mistake during a given operation, and the patient dies, do I discard this branch of medicine, do I erase this branch of science?”

Al Akhbar Al Adab is reporting that Baha’ Taher, the winner of the recently established Arabic Booker Prize for his novel واحة الغروب  (“Sunset Oasis”), has declined to be among the candidates for the annual Mubarak Literature Prize, an official literary prize that comes with some serious cash. I think this may the same prize that novelist Sonallah Ibrahim famously rejected in 2003, with a dramatic speech from the podium.
I was sent this image in an email forward.
The text says: “You can’t stop them, but you can protect yourself.” 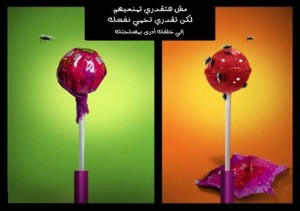 Two obvious (and rhetorical) questions: Can we really not stop harassment? And does veiling really “protect” you?

The French-Egyptian author Albert Cossery passed away on June 22. We are great fans of the Cossery oeuvre here at Arabist, and if you haven’t read any of his darkly funny books I highly recommend that you do so (I’m a big fan of “Mendiants et Orgueilleux,” or “Proud Beggars” (1955) an of “La violence et la dérision”). He left Egypt in 1945 but continued to write about it for the rest of his life. He had a wonderful grasp of the graciousness and cynicism of Egyptian street life, and of the hashish-smoker’s lifestyle; and he was a great political satirist whose plots are still perfectly relevant.
A few weeks ago Gamal Al Ghitany (the novelist and editor of Akhbar Al Adab) wrote a column about Arabic best-sellers. He was talking about a general trend, but he focused on the novel “Banaat Riyadh” (“Girls of Riyadh”) which has been a best-seller in the Arab world and has recently come out in English. Al Ghitany talks about how Arabic literature, after 9/11, has become of interest to the West, and how Arab writers have (consciously or unconsciously) met a prospective Western audience’s particular demands. “What is required?” he writes. “What’s required is a peek into this society which seems closed to Westerners, and in which women occupy a particular place…” Al Ghitany describes “Banaat Riyadh” as “a modest, ordinary work from an artistic point of view” but he says, according to the “new literary standards” it’s a “treasure trove, starting with the title.” Al Ghitany wouldn’t mind the work’s commercial success if it weren’t taken for a direct indication of its literary value so that, he writes, a British newspaper mentioned the work among a list of “six essential works to understanding Arabic literature.”

While I share Al Ghitany’s frustration with voyeurism and sensationalism, and with the generally quite superficial and misinformed Western coverage of Arab culture, I’ve actually heard some pretty good things about “Banaat Riyadh.” No one says it’s a masterpiece, but three women friends whose taste in books I trust have told me they greatly enjoyed it. I haven’t read it yet (it’s part of a big pile of books on my shelf that I often eye with guilt) but based on what I’ve read about it, it sounds like the author exploits the desire to see into the life of women in Saudi Arabia in conscious, funny and perhaps subversive ways. And she seems to use different dialects, registers, and languages to great effect.

Anyway, this column reminded me of the controversy that has surrounded Marilyn Booth’s translation of “Banaat Riyadh” into English. Booth has written at length about the ways the author and publisher changed her translation without consulting her. She gives many examples in this article in Translation Studies (unfortunately not free to the public) of the kinds of changes that were made. I have to say that based on the examples she gives it certainly looks as if the changes flattened the narrative voice she’d created into something more formal and less charming.

END_OF_DOCUMENT_TOKEN_TO_BE_REPLACED

Egyptian health officials have been gearing up for anti-smoking campaign for a few months, and a few weeks ago new warning labels appeared on the humble Masri pack of Cleopatras and other local and international brands. It’s a big marketing shift in a country of permanent smokers where the state-owned monopoly cigarette manufacturer, Oriental Tobacco, has never had to deal with any real pressure on public health issues and the price of cigarettes is almost as politically strategic as the price of baladi bread, and where illnesses that can be caused or exarcebated by smoking, such as heart disease, are a major cause of deaths.

The AP has a story out on the new labels, and the gory labels themselves are after the jump.

CAIRO, Egypt – Offering a cigarette is as common as a handshake in Egypt, where the culture of smoking is so entrenched that patients and friends sometimes light up in hospital rooms. But now, the government is finally getting serious about the health risks, launching a new campaign of stark visual warnings about tobacco’s dangers.

Starting Aug. 1, cigarette labels in Egypt will be required to carry images of the effects of smoking: a dying man in an oxygen mask, a coughing child, and a limp cigarette symbolizing impotence.

It’s a major step in Egypt’s fledgling anti-smoking campaign and a dramatic change in a country where public discussion of smoking’s health risks is nearly nonexistent.

For the new label requirements, authorities field-tested a variety of images.

They found that warnings linking tobacco with death were not particularly effective with Egyptians, since dying is perceived as inevitable anyway. Also, images of diseased lungs left people confused about what was being shown.

Instead, the new warnings focus on threats to health and, particularly, to family, like the effect on children and pregnant women and the risk of impotence. Numerous studies, including a 2003 report by Tulane University researchers, have found that smoking can be a major cause of erectile disfunction, in part because it constricts veins and arteries, reducing blood flow.

“We need something to give the smokers a shock that they are in great danger,” said Dr. Mohammed Mehrez, head of the tobacco control department.

There are many myths to overcome.

Some Egyptians are convinced only light cigarettes lead to impotence. Earlier this year, the state-owned manufacturer Eastern Tobacco Company voluntarily put pictures of diseased lungs on some packs — but smokers just figured those packs were the ones that were harmful and switched to others, which some shopowners promptly started selling at a higher price.

[From Egypt’s new tools in war on smoking: Stark warnings on impotence, disease]

END_OF_DOCUMENT_TOKEN_TO_BE_REPLACED

Links from my del.icio.us account for June 14th through June 16th: