Links from my del.icio.us account for November 28th through November 30th:

Links from my del.icio.us account for November 26th through November 28th:

I was at the Middle East Studies Association conference in DC last weekend (a huge 3-day event with hundreds of academics presenting papers on hundreds of topics). I didn’t attend that thoroughly–it was mostly a chance to see old friends in DC. One of the panels I did go to was on Café Riche. Half a dozen students at AUC’s Economic and Business History Research Center are working on a book on the famous Downtown Cairo landmark (its working title is “Café Riche: A Hundred Years of History,” and it will be published by AUC Press.)

The papers focused on the cafés social and intellectual history, with heavy emphasis on its importance to 1960s writers; they used oral histories and documents obtained from the owner. Unfortunately none of the papers really delves into the economics of Riche–the details of how it operates, and of the background and motivations of its grumpy current owner, Mr. Magdy. This is basically because the young researchers depended on Mr. Magdy for access.

The talk that followed the papers (with Roger Owen and Fawwaz Trabulsi intervening) was particularly interesting. The conclusion seemed to be that Café Riche has turned into an artificial museum of itself, a tourist attraction using its history as its capital (and a kind of obnoxiously elite social space at that–with an expensive menu designed to keep the “riff-raff” out and, apparently, an overtly anti-muhagaba policy. Yet clearly this landmark exerts a strong nostalgic pull, since even though everyone agrees it’s almost irrelevant to the capital’s current cultural life, it nonetheless ends up the center of a panel and a book. One of the remarks that I enjoyed was when one of the young presenters said that Café Riche has always been an imagined space, that the 1960s writers who made it famous were themselves weaving a myth of romantic freedom into the place–that it has in some sense never really “been” but has always been made up.

Meanwhile, what I’d like to know is: is it really open again?

This morning I received an alarming email from my friend Golo, a great French cartoonist who has been living in Egypt since the 1970s. Golo lives in Gurna (Qurna – in Upper Egypt the letter “qaf” is pronounced “gaf”), the small village on the other bank of the Nile from Luxor, where he runs a NGO for local children. Gurna is a famous village because it sits atop a major archeological site, including several tombs. Golo writes that the longstanding government efforts to vacate and demolish Gurna village are coming to a showdown, with electricity to the area being cut off this week:

My translation: On Tuesday 25 November at 11am, the authorities, without warning, cut off electricity to the inhabitants of the hills of Gurna and removed supply cables. The families – men, women, CHILDREN – who were unable to come to an agreement for their relocation are therefore forced to use candles for lighting (as petrol for lamps is unavailable), even though these villagers had been paying their electricity bills.
Only archeologists and tourism sites continue to receive electricity.
The inhabitants have the feeling of living in Gaza rather than Egypt. They went to the hospital to begin a hunger strike but were refused entry.

For decades, the Egyptian government has tried to evict Gurna’s long-standing residents to turn the area into a tourism and archeology site, claiming that the village deprives Luxor of potential tourism revenue and that sewage from its houses is seeping into the tombs [note: I find this NYT story rather too reliant on government sources]. Efforts began in the 1940s with famed architect Hassan Fathy‘s neo-traditional housing project. But, more recently, it has become part of a larger project to redesign the West Bank of the Nile near Luxor into a luxury residential area, where wealthy Egyptians and foreigners can have holiday homes on prime Nile-side property – with obvious benefits to the high-end tourism industry and property developers.

Repressive treatment of Gurna’s inhabitants is nothing new. As Tim Mitchell wrote in his book Rule of Experts: 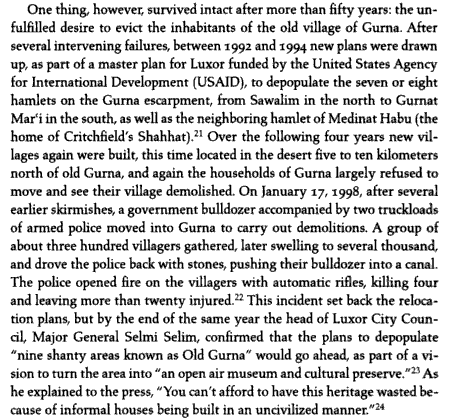 The villagers are being moved to New Gurna, about 15km away on the edge of the desert. Although there are reports that the new settlement is not awful, it is far from the main source of livelihood of the Gurnawis: tourism. But the point is not whether or not the evacuation of Gurna to New Gurna is a good idea, but rather whether the government could have found alternatives (as have been suggested) to this kind of rough-shod treatment of people who have a historic link to the place.

Although there are far fewer people left in Gurna today, there is still potential for unrest (especially in the current anti-regime environment), even if it will be the last throes the Gurnawis’ long fight to retain their land and homes.

Hossam has been following the latest repressive measures being taken against labor activists in Mahalla, one of the center of labor protests in Egypt. He says:

There is a ongoing crackdown on labor activists in Mahalla, since they staged a demonstration last October against the management’s corruption:

Following the demo, the management decreed the transfer of four activists from their positions:

1- Blogger Kareem el-Beheiri was moved to the Cairo office

2-Mohamed el-Attar was moved to the Alexandria office

3-Amal Said was moved to the company’s nursery

4-Wedad el-Demerdash was also transferred to the nursery

More alarmingly, the two women (Amal and Wedad) were sexually assaulted by thugs at the behest of the management, when they tried to enter the company compound.

The victimized workers’ colleagues are planning a demo on Saturday in solidarity. However yesterday another activist was victimized (named Wael Habib) as he was distributing leaflets in the company calling for the demo:

It appears security is trying to block some of the labor activists who’ve done the most to get information out in the last few years from having access to the main factory.

Jonathan Wright of Reuters has a great story on Egypt’s attitude towards the Somali crisis, which is having an impact on Suez Canal income as ships begin to re-route around the Cape of Good Hope to avoid the area off Yemen and Somalia where most of ships are being attacked. It covers the parallels between the fall of Mamluk Egypt to the Ottoman, when the Sultan al-Ghouriwas unable to face piracy on the Red Sea as he fought Ottoman advances in Syria, and today:

Egypt, one of the main direct beneficiaries of the transit trade, takes time to react. The government is in the hands of an aging leader, who looks to outside powers for help.

That was the challenge that Mamluk ruler Qansuh al-Ghouri faced in the early 16th century, when Portuguese ships appeared unexpectedly east of Suez and started to harass Egypt-bound shipping in the Red Sea and its approaches.

After centuries of peaceful trading, Egypt had no Red Sea fleet capable of countering the Portuguese menace. It may have underestimated the danger, despite diplomatic overtures from Venice, Yemen and the princes who ruled the west coast of India.

END_OF_DOCUMENT_TOKEN_TO_BE_REPLACED

Links from my del.icio.us account for November 24th through November 25th:

Links from my del.icio.us account for November 23rd through November 24th:

Links from my del.icio.us account for November 20th through November 22nd:

Don’t know how I missed this, but the November issue of the New York Review of Books had a nice long profile of Cavafy and discussion of the relationship between his work and his biography, most notably his membership in the Greek diaspora and his homosexuality.