WASHINGTON – When it comes to the troop surge in Iraq, a bunch of arm chair generals in Washington are influencing the Bush Administration as much as the Joint Chiefs or theater commanders.

A group of military experts at the American Enterprise Institute, concerned that the U.S. was on the verge of a calamitous failure in Iraq, almost single handedly convinced the White House to change its strategy.

They banded together at AEI headquarters in downtown Washington early last December and hammered out the surge plan during a weekend session. It called for two major initiatives to defeat the insurgency: reinforcing the troops and restoring security to Iraqi neighborhoods. Then came trips to the White House by AEI military historian Frederick Kagan, retired Army Gen. John Keane and other surge proponents.

More and more officials began attending the sessions. Even Vice President Dick Cheney came. “We took the results of our planning session immediately to people in the administration,” said AEI analyst Thomas Donnelly, a surge planner. “It became sort of a magnet for movers and shakers in the White House.” Donnelly said the AEI approach won out over plans from the Pentagon and U.S. Central Command. The two Army generals then in charge of Iraq had opposed a troop increase.

Quite aside from whether the surge is working or not (I have no idea, although the continuing death tolls in Iraq would suggest it hasn’t done much outside of a few areas), should think-tankers trump generals in planning wars? Isn’t this what you always learn is a bad thing for military performance — like Hitler taking over war-planning from the Wehrmacht? (Obviously I am not comparing the AEI to the Nazi Party, trolls.)

The death of this crackpot creed is nothing to mourn:

The liberal interventionism that took root in the aftermath of the cold war was never much more than a combination of post-imperial nostalgia with crackpot geopolitics. It was an absurd and repugnant mixture, and one whose passing there is no reason to regret. What the world needs from western governments is not another nonsensical crusade. It is a dose of realism and a little humility. 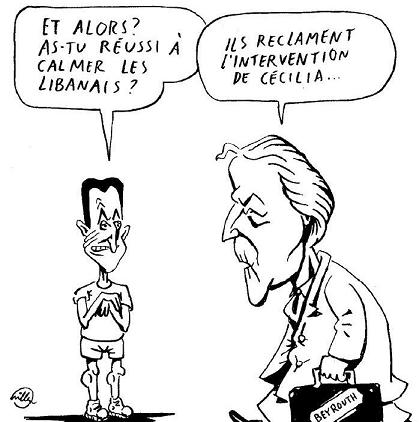 Via Larbi. (If you don’t get it, Cecilia Sarkozy apparently helped charm Qadhafi into releasing the nurses held in Libya. Bernard Kouchner, the Frennch foreign minister, just got back from Beirut in an attempt to resolve the split government there.)
Very interesting BBC Radio Four documentary on a coup by wealthy Americans to overthrow Roosevelt in the 1930s:

The coup was aimed at toppling President Franklin D Roosevelt with the help of half-a-million war veterans. The plotters, who were alleged to involve some of the most famous families in America, (owners of Heinz, Birds Eye, Goodtea, Maxwell Hse & George Bush’s Grandfather, Prescott) believed that their country should adopt the policies of Hitler and Mussolini to beat the great depression.

There are some (occasionally forced) parallels with the current situation in American — the role of the uber-wealthy and the New Gilded Age, Cheney’s powerful and shadowy vice-presidency, etc.

Fears that Iran is systematically mistreating political prisoners and dissidents have been further fuelled after the parents of three detained student activists claimed their sons had been tortured.
In a letter to the country’s judiciary chief, Ayatollah Mahmoud Hashemi Shahroudi, the parents alleged that the students have suffered a catalogue of physical and psychological abuses since being incarcerated in Tehran’s Evin prison in May.

Two weeks ago I got to see the animated feature version of Persepolis. One of the things I drives home very effectively is that the fundamentalist regime in Iran has been much, much worse in terms of human rights and torture (never mind personal freedoms) than the old Shah regime, with its notorious CIA-trained SAVAK security service, ever was. Even more so, the film makes a very effective point in showing how fundamentally retarded that government was, much like any government that seeks to police the private moral life of its citizens — in other words, an extreme version of what the “secular” regimes in many Arab countries have resorted to. Think of Egypt, and those trials to forcibly divorce public figures judged to be apostates, or the current contradictory statements of the Mufti, or among the opposition of the ridiculous moral crusades regularly brought out by the likes of the Muslim Brotherhood in Egypt or the PJD and its supporters (such as at-tajdid newspaper) in Morocco.

Before his resignation, his Balad party held only four seats in the Knesset in a country where many Arab Israelis still tend to vote for the mainstream political parties, particularly Labour – now part of the ruling coalition. Even Bishara admits there is not widespread public support for his ideas among his own community. One opinion poll earlier this year found that three-quarters of Arab Israelis would support a constitution describing Israel as a Jewish and democratic state.

However, in recent months, that has begun to change. For a start, racism against Arabs in Israel is rising, according to at least one recent poll. In a survey for the Centre Against Racism, a poll of Jewish Israelis found that more than half believed it was treason for a Jewish woman to marry an Arab man; 40% said Arabs should no longer have the right to vote in parliamentary elections; and 75% opposed apartment blocks being shared by Jews and Arabs.

At the same time, more and more prominent Arab Israelis are adopting ideas similar to Bishara’s and proposing a fundamental challenge to the Jewish nature of the state. Four separate documents have emerged since December, each making a similar case. Adalah, a human rights group, issued a draft constitution that said Israel should be defined not as a Jewish state but as a “democratic, bilingual and multicultural state”. It called for an end to the Law of Return, which gives automatic citizenship to anyone with at least one Jewish grandparent, and it called on Israel to “recognise its responsibility for past injustices suffered by the Palestinian people”.

Mobilizing the Arab population of Israel is perhaps the best way left to force a fair resolution of the Israeli-Palestinian conflict – it’s pretty clear that most Palestinians in the Occupied Territories, ghettoized and radicalized over 40 years of abuse, are not able to do it.

The Israeli government has approved a school textbook that for the first time presents the Palestinian denunciation of the creation of Israel in 1948.

The book, to be used only in Israeli Arab schools, notes that Palestinians describe the event as a “catastrophe”.

“Both the Israeli and Palestinian versions have to be presented,” education minister Yuli Tamir said.

The book was condemned by right-wing politicians but hailed by Arab Israelis who say all schools should use it.

Separate schools, separate schoolbooks. But don’t call it an apartheid state. (Why on earth the spin on this article, notably the headline, is positive is beyond me.)

Hannah Allam has a cool inventory of signs spotted in Baghdad’s Green Zone.

Update: Now Hannah has a list of military acronyms used in Iraq.

Harpers’ Scott Horton has a really good post linking the great writer Elias Canetti, notably his Crowd and Power, and the Bush administration’s emotional management of its war dead. Do read the old Harpers’ review article on Canetti from 1980 too if you can.
The New Yorker has a profile of Avrahum Burg, the former Knesset speaker turned anti-Zionist, that’s well worth reading even if it contains obvious faults and biases, notably in the first two paragraphs. It also contains some excellent examples of how the Zionist meta-narrative brooks no dissent and savages its opponents by qualifying critiques as “unutterable”:

Soon after the interview was published, Otniel Schneller, a Knesset member from Ehud Olmert’s centrist Kadima Party, said that when Burg dies he should be denied burial in the special section of Mt. Herzl National Cemetery, in Jerusalem, reserved for national leaders. “He had better search for a grave in another country,” Schneller said. One letter to the Jerusalem Post compared Burg to young people who, after military service, go off to India to find their spiritual selves in an ashram. “Yesteryear, Burg would have been disowned as at least a lunatic,” the columnist Sarah Honig wrote in the same paper. “The grave danger is that today he gives voice and lends insidious quasi-respectability to what was heretofore unutterable. By tomorrow, the uncontrollable infestation he spreads might confer outright legitimacy on Israel’s delegitimatization.” If and when Israel’s borders changed, Honig continued, “Burg probably won’t stick around to risk the ensuing slaughter. The new Wandering Jew will pack his sinister seeds and propagate his wicked wandering weeds from afar.”

In some ways I think this article — notably the themes of Holocaust exploitation and the power of the US Lobby — would not have been possible before Norman Finkelstein’s books and the “lobby” essay by Stephen Walt and John Mearsheimer.