Report by Peter Mandaville and Shadi Hamid
Read it here

On Abu Hafs.
Read it here

There were two passages in Obama’s speech in Ankara, which I suppose is his much-touted address to the Muslim world, that struck me. The first moved away from the idea that engagement with the Muslim world is a policy solely based on the war on terror and the problem of Islamic fundamentalism. This is a great step, and most of the advocates of public diplomacy in the last few years were deeply wrong in framing the need for outreach in the context of al-Qaeda. The subtext to that idea was, essentially, a conflation of al-Qaeda and Islam that was deeply damaging to America’s image in the Muslim world — and it did not help that President Bush pathetically tried to show his understanding of Islam by holding iftars and other pageants. Here it is:

But I also want to be clear that America’s relationship with the Muslim work cannot and will not be based on opposition to al Qaeda. Far from it. We seek broad engagement based upon mutual interests and mutual respect. We will listen carefully, bridge misunderstanding, and seek common ground. We will be respectful, even when we do not agree. And we will convey our deep appreciation for the Islamic faith, which has done so much over so many centuries to shape the world for the better – including my own country. The United States has been enriched by Muslim Americans. Many other Americans have Muslims in their family, or have lived in a Muslim-majority country – I know, because I am one of them.

Above all, we will demonstrate through actions our commitment to a better future. We want to help more children get the education that they need to succeed. We want to promote health care in places where people are vulnerable. We want to expand the trade and investment that can bring prosperity for all people. In the months ahead, I will present specific programs to advance these goals. Our focus will be on what we can do, in partnership with people across the Muslim world, to advance our common hopes, and our common dreams. And when people look back on this time, let it be said of America that we extended the hand of friendship.

The great thing about this approach is that it says to Muslim countries, and societies, that while America has a problem with al-Qaeda it will not deal with Muslims through that problem alone, but in a multilateral fashion that addresses the “normal” global problems we all face: climate change, trade policy, diplomacy, conflict resolution, etc. The focus on education (in a dire state in much of the Arab world at least) encapsulates the universalism of these common concerns. Basically, the difference between Bush and Obama’s approach is a switch from a focus on exceptionalism (Muslim societies as unusually problematic) to one of universalism (all countries and societies face common challenges far beyond the ones that have to do with religion and its excesses.)

The second part is linked to Obama’s choice of Turkey, a Muslim majority country with deeply secular values despite the fact that its current government is Islamist, as the venue for the speech. In many respects it’s an odd choice, considering that for a long time Turkey wore many different hats than “large Muslim country” in US policy circles: NATO partner, prospective EU member, Eastern Mediterranean economic powerhouse, energy crossroad, gateway to Central Asia, etc. I interpret it in the fact that aside from India and possibly Indonesia, no country with a large population has the type of government that could be seen as progressive, at least partly committed to democracy and that can be seen as successful in terms of socio-economic development. Hence the focus on the very particular Turkish heritage of Attaturkism, which for all its faults has helped create a very dynamic, relatively open society in Turkey:

This morning I had the privilege of visiting the tomb of the great founder of your Republic. I was deeply impressed by this beautiful memorial to a man who did so much to shape the course of history. But it is also clear that the greatest monument to Ataturk’s life is not something that can be cast in stone and marble. His greatest legacy is Turkey’s strong and secular democracy, and that is the work that this assembly carries on today.

This future was not easily assured. At the end of World War I, Turkey could have succumbed to the foreign powers that were trying to claim its territory, or sought to restore an ancient empire. But Turkey chose a different future. You freed yourself from foreign control. And you founded a Republic that commands the respect of the United States and the wider world.

There is a simple truth to this story: Turkey’s democracy is your own achievement. It was not forced upon you by any outside power, nor did it come without struggle and sacrifice. Like any democracy, Turkey draws strength from both the successes of the past, and from the efforts of each generation of Turks that makes new progress for your people.

Not only does Obama here recognize the heroic resistance of Turkish nationalists against efforts by Europeans to carve out their country after World War I, but explicitly rejects the idea of external imposition of democracy (a landmark Bush administration idea) and puts the focus on domestic forces. Beyond this, he also puts the emphasis on Turkey’s achievement as a a secular country whose ruling party, while notionally Islamist, accepts and has thrived within a secular framework. I am probably reading too much into this, but I like to see in it an argument for the secular framework as, in recent history at least, a great model for development, especially compared to the outright Islamist models of Iran, Saudi Arabia or Sudan that have been respectively civic, moral or social failures — or indeed the hybrid pseudo-secular experiments of Egypt, Syria, Morocco, Algeria and most other Arab states.

The problem here is that while it’s an approach that greatly appeals to me ideologically (I believe that the secular model is best), I am not sure it is practical anymore. The contemporary dominance of Islamist ideology, and its recuperation by the power elites of Arab countries even when they claim to cherish secular values, has gone too far. The opportunity that Turkey grabbed (not to disregard Attaturkism’s cultish tendencies and human rights abuses) has passed the Arab world by, and we are left dealing with a bizarre mishmash of the worse that Islamism, socialism, capitalism and nationalism have to offer: intolerance, inefficiency, cronyism and empty jingoism. The trick is now to find the best of those same ideologies, and in this case Islam’s ideal of social justice does have something valuable to offer.

The question for Obama will be whether, in going beyond the idea of democracy promotion that we know is difficult to practice when facing deeply-entrenced anti-democratic forces (first and foremost the regimes in place), he will abandon it altogether. For me the first test of this would be to see him back the formation of a representative national unity government in Palestine that includes legitimately elected Hamas, making new elections possible in which, this time, I hope the United States won’t waste their money interfering in on Fatah’s side. 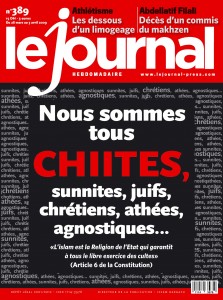