Egypt’s foreign minister, Ahmed Aboul Gheit, made the case last friday for a permanent Arab seat (most probably filled by… wait for it… Egypt) at the UN Security Council. Not a bad idea, although scrapping the power of the veto would be better — or at least making the General Assembly or a plurality of Security Council votes able to override vetos.

Aboul Gheit added that Egypt has made “significant contributions” on the regional and international level, and that it plays a central role in the African, Arab and Islamic spheres. He said that such considerations reflect Egypt’s “clear eligibility for, and appropriate capacity in discharging the responsibilities of membership” in the Security Council.

I can’t say I like the civilizational talk that much though. The UN Security Counil is about power, not equal representation of civilizations — whatever that may be. If anything, certain organizations like ASEAN or the OAU might have a seat where there is no clear candidate for regional representation. Of course, in the Arab world’s case, Egypt has a much better chance than the Arab League.

“KHARTOUM, Sudan — Sudanese authorities accused an opposition party Saturday of plotting to kill more than three dozen senior government officials and blow up key sites in the capital, where heavily armed troops were out in force for a second day.

The state news agency said the planned attacks were part of a coup plot for which members of the opposition Popular Congress party were arrested earlier this month. An opposition official denied that his group had tried to overthrow the government.
”

Many of the things I love and hate about Cairo are mentioned in this essay about the great, mind-boggling city.

Although I have just finished reading a fantastic new book on the same subject (Cairo, City of Sand, by Maria Golia) which puts my piddling effort to shame. Expect a review of Maria’s book–which I cannot recommend strongly enough–soon.

Mahmoud gives background of an arrest of a human rights activist in Bahrain.

Something’s amiss (redux!): “The papers are full this morning of the King and the Crown Prince visiting the Prime Minister at his office. When this sort of thing happens, you just know that someone somewhere has “talked bad” about the ruling family or the prime minister specifically.
“ 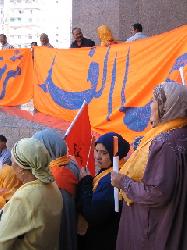 I was at the Administrative Court in Giza this morning to witness (as it turned out) the aspiring Hizb Al Ghad (Party of Tomorrow) once again not get permission to be registered as a political party. The Party Affairs Committee has turned down five attempts for this group to register, as it does with almost all aspiring parties. As others have done before them, the Al Ghad people have gone to the courts, but the judges decided to postpone the case till November 6. I don’t understand the legal intricacies, to be honest, but apparently this postponement means the case will have to be re-argued entirely; they are basically starting from scratch. What happened today (and yesterday, when the decision was postponed 24 hours) was that some of the members of the court never bothered to show up, thus making it impossible to hand down a decision. 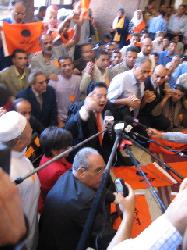 The aspiring party’s leadership consists of several prominent ex-Wafd members, including party head Ayman Nour and secretary general Mona Akram Ebeid. They have a detailed party platform, with constitutional reform one of their topmost priorities. They have also been building up quite a base, providing social services in some of Cairo’s lower class and squatter neighborhoods.

What was interesting today was the very well-planned and photogenic demonstrations of support that were staged outside the court (perhaps Nour’s wife Gameela, who is a journalist and the party’s press coordinator had something to do with this). Fifty to a hundred supporters, including many women, were allowed (or at least weren’t not allowed) not only to spread banners across the front of the building but also to enter the court building en masse. When it was understood that the wayward members were once again not coming (which was seen as an intentional boycott designed to keep the judiciary from handing down the positive decision that many expected), the crowd organized improvised sit-ins, broke into chants, and eventually stormed their way into the courtroom, literally knocking guards aside and battering down the doors.

At the recent NDP conference, there was talk of making it easier to allow new political parties to register. Supposedly, the appointment of several opposition party and independent members to the Party Affairs Committee and the establishment of a deadline after which the committee must answer petitions (they often just don’t ever answer) will streamline the process. Judging from today, those who want to found a new party in Egypt still have an uphill battle. On the other hand, they seem ready to fight.

“There are three main Sunni groups, and five separate factions within them; two Baathist groups; and two Shiite insurgent organizations, according to a recent issue of the Baghdad al-Zawra in Arabic — a weekly published by the Iraqi Journalists Association and translated into English by the CIA.

The groups are comprised of individual cells that are only loosely affiliated, a supposition endorsed by military intelligence officials in interviews with United Press International.

“The majority of these groups do not know their leadership, the sources of their financing, or who provides them with weapons,” the Sunday’s report stated.”

This is the kind of stupid thing that gives Muslims a bad name:

A religious edict saps the energy out of yoga enthusiasts in Egypt, where clerics say the 5,000-year-old practice violates Islamic law.

Answering a religious question put forward, Egypt’s highest theological authority called yoga an “ascetic Hindu practice that should not be used in any manner of exercise or worship.”

The undated but recent edict was signed by the mufti, Ali Gomoa.

The edict, published in the pan-Arab daily newspaper Al-Hayat and obtained Sunday by the Associated Press, called the practice of yoga “an aberration” and said mimicking it is “forbidden religiously.”

There is a serious problems with the use — and perhaps the tradition itself — of fatwas, especially when they are given out by a government appointed sheikh. There is not meant to be in Islam, as far as I can tell, an “official fatwa-maker.” This is why Ali Gomaa has occasionally clashed with Al Azhar University, which has a council of scholars that often give out fatwas. But in principle, fatwas can be made by any person, and are usually personal advice given to individuals, not a reflection of government policy (and indeed Egypt has not banned yoga). The problem is that when an idiot or extremist decides that yoga is haram, or that a certain writer has insulted Islam, or that it’s OK to kidnap Americans working in Iraq, it often looks like he’s speaking to all Muslims. Particularly if someone powerful — the state, a fundamentalist group, a university — had decided that this person is entitled to make fatwas.

If you’re interested in the Al Azhar book-banning issue that I wrote about here, read this fine opinion piece by Hossam Bahgat in today’s Daily Star. Bahgat reminds us that Al Azhar is a state institution and questions the “secular intellectuals vs. Islamizing state” phenomenon.
You gotta love that headline. What a sad state of affairs.

Major Powers Wring Hands Discreetly on Middle East: “Reuters – The world’s major powers wrung
their hands discreetly on Wednesday at the lack of progress
toward peace in the Middle East, chiding Israel and the
Palestinians in equal measure but offering no new ideas.”

Bob Novak, the conservative columnist who outed Ambassador Joseph Wilson’s wife Valerie Plame as a CIA agent, says he believes the Bush administration, if re-elected, will leave Iraq as quick as it can:

“Well-placed sources in the administration are confident Bush’s decision will be to get out. They believe that is the recommendation of his national security team and would be the recommendation of second-term officials. An informed guess might have Condoleezza Rice as secretary of state, Paul Wolfowitz as defense secretary and Stephen Hadley as national security adviser. According to my sources, all would opt for a withdrawal.

Getting out now would not end expensive U.S. reconstruction of Iraq, and certainly would not stop the fighting. Without U.S. troops, the civil war cited as the worst-case outcome by the recently leaked National Intelligence Estimate would be a reality. It would then take a resolute president to stand aside while Iraqis battle it out.

The end product would be an imperfect Iraq, probably dominated by Shia Muslims seeking revenge over long oppression by the Sunni-controlled Baathist Party. The Kurds would remain in their current semi-autonomous state. Iraq would not be divided, reassuring neighboring countries — especially Turkey — that are apprehensive about ethnically divided nations.

This messy new Iraq is viewed by Bush officials as vastly preferable to Saddam’s police state, threatening its neighbors and the West. In private, some officials believe the mistake was not in toppling Saddam but in staying there for nation building after the dictator was deposed.”

Perhaps not particularly credible — although I don’t quite see how it helps the Bush administration except by signaling hesitant voters that Bush might end US involvement in Iraq — but intriguing. If Novak wrote about it, then someone must have leaked it to him and it was probably on purpose considering how leak-proof this White House has been. If true, I doubt there will ever be a “humanitarian” preemptive war again.