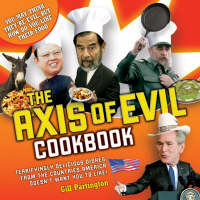 When they’re not actively attempting to develop weapons of mass destruction, ‘Axis of Evil’ countries such as Iraq, Iran and North Korea are busy enjoying their region’s finest dishes. And their ‘Axis of Somewhat Evil’ cohorts, such as Cuba and Syria, are at it too. With over one hundred recipes, from soups and salads to meat dishes and desserts, this unique cookbook includes snapshots of each country as well as profiles of famous leaders. Regional recipes appear alongside dictators’ favourite dishes – from Kim Jong-Il’s ruthless appetite for shark fin soup to Saddam’s celebrated rack of fresh roasted gazelle. Full of cultural anecdotes, political insight and delectable recipes, “The Axis of Evil Cookbook” is an intriguing and forbidden treat.

Right now available at Amazon.co.uk, but not the US site yet.

Although it has become well-known as one of Saddam Hussein’s worse crimes, the gassing of the Kurdish village of Halabja in March 1988 has not been the subject of extended reflection, particularly the tacit acceptance of Saddam Hussein’s policy of using chemical weapons against Kurdish dissidents and in his war with Iran that preceded Halabja. Joost Hiltermann, who in the early 1990s wrote for Human Rights Watch the first thorough report on the Halabja massacre, has now published a book on it in which he looks at the operation in itself (led by the recent sentenced Saddam henchman Chemical Ali) as well as its international context. A Poisonous Affair: America, Iraq, and the Gassing of Halabja looks specifically at how Reagan administration officials turned a blind eye to Saddam’s war crimes and continued to support him against Iran, which had also suffered from Iraqi chemical attacks. Hiltermann recently wrote in an op-ed:

Chemical Ali’s reign lasted two years, long enough to crush the Kurdish revolt, level the countryside, and seek to prevent a viable Kurdish national movement from ever arising again. Appointed by Hussein, his cousin, in March 1987, Chemical Ali, who headed Iraq’s security police, the Amn, wasted no time in sending a message to the Kurds that their time was up. “Jalal Talabani asked me to open a special communications channel with him,” he said later in a chilling speech to Baath party faithful, referring to the leader of the Patriotic Union of Kurdistan, who today, in vindication of his long struggle, is president of Iraq. “That evening I went to Suleimaniya and hit them with special ammunition.””Special ammunition” was the regime’s euphemism for poison gas. In 1987, chemical attacks on guerrilla strongholds multiplied, extending to villages and, in a horrifying climax, an entire town: Halabja, in March 1988. Thousands died in Halabja, and the overpowering fear this attack instilled ensured that when Chemical Ali launched his counterinsurgency campaign, called Anfal, a few days later he caused mass panic by deploying gas at the outset of each of the operation’s eight stages.Terrified villagers ran straight into the Iraqi military’s arms, who handed them over to the Amn. They in turn hauled tens of thousands of men, women, and children to areas far from Kurdistan, where execution squads completed the job. The affair was over in six months. Some 70,000 to 80,000 (the numbers are uncertain and disputed) never returned home.Much of this was known to the Reagan administration, according to government documents and interviews with some of the principals. But knowledge is only half of it. Spooked by the specter of an Islamic revolution radiating throughout the Gulf from Khomeini’s Iran, the administration threw its weight behind Hussein’s unsavory regime in its eight-year war with Iran, providing it with millions of dollars in credit guarantees as well as diplomatic cover, satellite intelligence, and, indirectly, weapons.US intelligence was fully aware of Iraq’s chemical weapons use, but the administration didn’t do anything about it. When it did go so far as to condemn it, in 1984, it did so with a wink and a nod, sending Donald Rumsfeld as envoy to Baghdad to appease the Iraqis by offering to restore diplomatic relations.

One of the things that Hiltermann points out is that since Chemical Ali’s trial took place before a trial specifically on Halabja taking place later this year, Kurds will most probably able to get answers out of him on certain crucial issues concerning the planning of the massacre:

The Anfal trial has now ended and although Chemical Ali’s sentence will be reviewed on appeal, he is likely to follow his cousin in death by hanging. This means that neither man will be present at the Halabja trial later this year. This is a pity, as their absence will reduce the trial’s impact and may deprive the Kurds of information that could help them understand the circumstances that prompted the regime to order the devastating attack.Absent from the courtroom also, but casting an enormous shadow on the proceedings nonetheless, will be the Reagan administration that condoned if not encouraged its proxy’s chemical weapons use and, when Hussein’s behavior proved too embarrassing, in Halabja, did its best to defuse the fallout through cover-up and deceit.