Yesterday several of the opposition-minded papers in Egypt ran with front-page stories about Bilal Diab, a Cairo University student who heckled Prime Minister Ahmed Nazif as the latter was delivering a speech to students about how great things were going in Egypt. I love this story, as does the Egyptian media, because it is reminiscent of other similar incidents well-known in political and activist circles, such as Muslim Brother Abdel Moneim Aboul Fotouh and Nasserist Hamdeen Sabahi’s famous harangue to Sadat in the 1970s (they were student union politicians then) or more recently (a few years ago) leftist political commentator Muhammad Said Sayyed’s osÃ© questions about democracy to President Mubarak at the Cairo Book Fair.

With those words Belal Diab, a 20-year-old literature student at Cairo University, interrupted Prime Minister Ahmed Nazif as he addressed the student body on campus Monday, kicking up a media storm.

â€œI was provoked [by Nazifâ€™s speech],â€� Diab told Daily News Egypt. â€œHow can he talk about information technology, the internet and how the youth has to use it to express their opinions and get their voices out there when those who did exactly that are now all behind bars,â€� he said, referring to students who created the Facebook group promoting the April 6 strike.

â€œI admit that I was out of order but I had to get my voice out there, officials have to start listening to us instead of detaining us,â€� he said.

When Diab had completed his outburst, Nazif had turned to him and said, â€œI feel sarcasm and pain in your words, but Iâ€™m telling you Egypt is alright and you have to look at everything with objectivity because there are many challenges facing this country.â€�

â€œThere objective reason for detaining these people is the acts of destruction they committed and there is a thin line between expressing your opinion and encouraging destruction, striking and rioting. Many want such chaos in this country but we wonâ€™t let this happen. Egypt is not a chaotic country,â€� continued the Prime Minister.

Diab, however, insists that he wasnâ€™t wasnâ€™t being sarcastic. â€œI was speaking passionately and my tone was serious. As for the sarcasm he was talking about who is really being sarcastic in this country, is his cabinet â€¦ those telling people that everything is fine and were are progressing,â€� he said.

The incident led to an abrupt halt of the lecture. Neither the Minister of Higher Education, Hany Helal, nor the President of Cairo University, Ali Abdel Rahman, gave their scheduled speeches.

As soon as Diab had ended his impassioned speech, two security guards sat behind him, but when the lecture was over and they tried to grab him they were prevented from doing so by the crowd, which saluted him for having â€œthe gutsâ€� to speak openly.

But soon enough, the same security guards, accompanied this time by a police officer and a university professor, caught up with him. The professor asked for Diab’s university ID. It was then that the guards took hold of him in front of the crowd and escourted him to the office of the head of the universityâ€™s security.

What’s neat about this story, and some of the more recent similar episodes, is that you have people who are not really political activists standing up for themselves and their country. The same could be said of Esraa Abdel Fattah, the woman who is said to have started the Facebook campaign for a general strike on April 6, and who was arrested and charged with inciting unrest. Interestingly, both Diab and Abdel Fattah are young members of the al-Ghad party, the vehicle for Ayman Nour’s brief but spectacular entry into national politics in 2005. Nour, you will remember, is still in jail on trumped up forgery charges as punishment for his temerity. But obviously the spirit of dissent and contestation that Nour and many others (notably Kifaya) pioneered in 2005 is still alive and well, even if those movements and parties aren’t.

On a completely different note: this week the pro-government magazine Rose al-Youssef had a 32-page special on Facebook, including everything from its use for activism to the different groups Egyptians have formed there (such as, apparently, “Egyptians who love Israel” and “Egyptians who love George W. Bush” as well as, of course, the many sexual opportunities a Facebook account provides. Much of this “special” is complete bullshit, but I do like the cartoons. 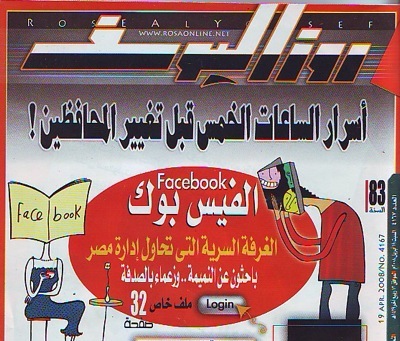 0 thoughts on “Talking back”