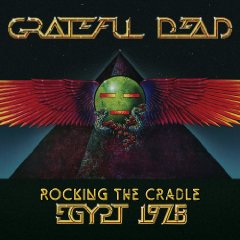 I am not a Deadhead, but having no idea until today that the Grateful Dead played at the Pyramids in 1978, I would love to see this new DVD (click on the album cover above to see the Amazon details):

Much has been written about this storied adventure: About the band’s long-standing desire to play in “places of power,” as Phil put it years ago… The incredible logistical gymnastics necessary to get permission for this strangest of American rock bands to bring their peculiar alchemy to the cradle of the ancient world… The huge, scattered caravan of crazies that descended on Cairo from the U.S. and Europe, drawn to the desert by some irresistible force… The sheer magnitude of shipping in tons of sound equipment, setting up in 110-degree heat, maxing out the local power grid, trying to turn the King’s Chamber in the Great Pyramid into an echo chamber (alas, Osiris would have none of that!)… The wondrous interplay at each of the three concerts between Nubian drummers and singers and the Grateful Dead… The miraculous final show, during a total lunar eclipse… The synchronicity of that last show and the signing of a peace treaty between Egypt and Israel… Magical horse and camel rides under the desert moon…Trips up and down the Nile… High adventure at every turn!

0 thoughts on “Rocking the cradle: Grateful Dead in Egypt, 1978”