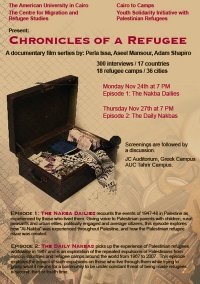 Chronicles of a Refugee is a 6-part documentary film series looking at the global Palestinian refugee experience over the last 60 years. Through the voices of Palestinian refugees, the first three episodes recount the experiences of Palestinian refugees since 1947. They are more historical and informative, presenting an almost comprehensive review of 60 years of dispossession.Starting with ‘al-Nakba’ (catastrophe) in 1948 (part I) and continuing through repeated community and individual expulsions (part II) and enduring discrimination by virtue of being Palestinian (part III). The last three parts tackle three issues facing Palestinian refugees, and are meant to open up debate on contentious issues. Part IV deals with identity formation and the impact of being in diaspora. Part V looks at strategies for the Right of Return and who is doing what to achieve realization of this right. Part VI focuses on issues of leadership and representation, from the perspective of what kind of representation have Palestinians had over time and what do they want now.

“Chronicles of a Refugee” is an independently produced film made by Perla Issa, Aseel Mansour
and Adam Shapiro, with a musical score by Tarik “Excentrik” Kazaleh and Ramallah Underground. Funding for the project was made possible through individual donations and the film is in no way associated with any organization, political party, faction or otherwise.

0 thoughts on “Chronicles of a Refugee”