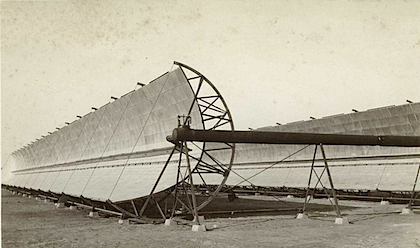 The 11th Cairo International Biennale kicks off in a few days, and while I’ll unfortunately miss the opening I will be back in a few weeks to check out this intriguing project I was emailed about. The No. 1 Sun Engine was operational in Maadi, a posh southern suburb of Cairo, in 1913 and was among the first serious experiments in solar power. Its American inventor, Frank Shuman, raised funds to deploy the bizarre contraption (which works by powering a low-pressure steam turbine) in London before visiting sun-drenched Cairo to build it. Its first use in to power a water-pump for irrigation with water from the Nile.

You can read more about the history of the sun engine at project page, where there’s a timeline that tracks Shuman’s movements alongside with prominent historical events, such as Lord Kitchener’s arrival in Cairo and the start of World War I. The juxtaposition of this early venture into solar power and major geopolitical developments is fascinating, if only because WWI ushered in the era of oil (and the systematic sabotage of alternative energy projects), while Shuman developed his machine because he (as a Pennsylvanian) was worried about reaching the exhaustion of then-recoveroble coal, the Victorian age’s equivalent of peak oil. Of course, coal (control of which was a key objective of WWI and which is now undergoing a revival in China and the US among others) powered the war effort and shaped European societies, notably by making industrialization possible, much as after WWI control of oil (and specifically Middle Eastern oil) would help make possible massive social change and an unprecedented age of plenty in America.

I’ve always found this interconnection of social organization, imperialism and technology fascinating – such as in some of the recent work of Tim Mitchell, who has looked at the differences in social organization of coal and oil-based societies (because of the distribution model for each resource) and their role in making Western democracy possible (and therefore also perhaps impossible in other conditions). In this respect I highly recommend his short article n the subject (to my knowledge the only one available), which is in Word format here: Tim Mitchell’s article on carbon democracy

But I’ll go see this exhibition for the sheer cool steampunk aspect of it.