Jacob Mundy provides a richly detailed background of Abdel Aziz Bouteflika’s consolidation of power in the last decade in this fine MERIP article:

Given the outcome of the 1999 elections, it was important for Bouteflika to establish an independent base of support, one that would free him from the whims of the generals who put him in power. Though Algeria’s 2002 elections recorded what was then the lowest turnout since independence, the outcome indicated the growing power of Bouteflika’s electoral machine. The FLN — a party that had seemed moribund in the 1990s — took 51 percent of the seats in Parliament. This surprising show of strength was repeated in October at the local level. Though Bouteflika has been officially independent from the FLN since 1999, the reconstituted FLN provided him with the foot soldiers to bring people to the ballot box. The formation of the “presidential alliance” — a three-party coalition led by the FLN — would later guarantee the Bouteflika camp’s total electoral hegemony. Still, Islamist parties performed well in 2002, despite severe restrictions on many candidates; the largely secular-left Berber opposition stayed true to an electoral boycott stemming from the 2001 unrest in Kabylia.

As the April 2004 presidential contest approached, there were indications that elements of the security-military-intelligence apparatus were starting to see Bouteflika as a threat. Bouteflika’s Brutus stepped forward in 2003, when Prime Minister and FLN Secretary-General Ali Benflis — none other than Bouteflika’s 1999 campaign manager — declared his intent to run. Yet even with the FLN divided and Benflis’ candidacy supported by powerful figures in the security oligarchy, Bouteflika sailed to an impressive 85 percent margin of victory, on turnout of nearly 60 percent. Benflis, who quickly disappeared from the political scene, managed to pull in 6 percent.

With his 2004 reelection, it was clear that Bouteflika had established the independent base. A growing ensemble of stakeholders, from traditionalist elements of Algerian Islam to veterans’ and war martyrs’ groups, provided Bouteflika with his own means of reaching down to the grassroots. An Algerian sociologist has provisionally termed this coalition Bouteflika’s makhzan, in reference to the patron-client networks that have allowed the Moroccan monarchy to rule for centuries.

There was perhaps no greater indication of Bouteflika’s triumph than the June 2004 “retirement” of Army Chief of Staff Gen. Mohammed Lamari, architect of the dirty war in the 1990s, and the 2005 posting of retired Gen. Larbi Belkhir to the embassy in Morocco. Belkhir, a key player for decades, had reportedly championed Bouteflika in 1999 in the face of the skepticism of others and subsequently ran the president’s office. Bouteflika’s new chief of staff and deputy defense minister were trusted allies. With Khaled Nezzar (mastermind of the 1992 coup) sulking in his villa, there appears to be little left of the cadre of “deciders” who allegedly manipulated events behind the scenes in the 1990s, except for long-time intelligence head Mohamed “Tewfik” Medienne, who, like the Wizard of Oz, seems to instill fear simply by staying out of the public eye.

It was only after his 2004 reelection that Bouteflika fulfilled his end of the bargain with those who had put him into office. On February 27, 2006, the presidential cabinet, chaired by Bouteflika himself, used a special rule to ratify the National Peace and Reconciliation Charter while the parliament was in recess. Though the Charter had ostensibly passed a national referendum in September 2005, there were doubts as to the authenticity of turnout figures. In its final form, the law amnestied insurgents who surrendered after January 2000, including those facing criminal proceedings or held in prison, while at the same time opening a new six-month window for more insurgents to surrender. At the same time, the Charter kept the same restrictions on amnesty as the 1999 Civil Concord, but those found guilty of unprotected offenses could receive reduced sentences. For the families of the “disappeared” or those abducted by armed opposition groups, death certificates could be issued once all investigations had been completed. Perhaps the most important aspect of the Charter was that, for the first time, the government extended full immunity to the security and military forces, including civilian militias. Merely to criticize the actions of the government or its agents during the “national tragedy” of the 1990s was made a criminal act.

Bouteflika’s victory is now almost total. He has conquered the generals, kept the FIS from returning in any form, staved off democratic challenges from his own party and the Kabyle Citizens’ Movement, and won the right to a third, or even fourth, term. The challenges he faces now seem almost quaint by comparison: residual political violence, high unemployment, widespread disillusionment with government and the state’s near total dependence on hydrocarbons.

Well perhaps Algeria has not made this transition from military oligarchy to dictatorship, it’s successfully used an old-generation figure to pass control over to a new generation of oligarchs. And the problem with such coalitions around a transitional figure is that they might very easily collapse with his passing. In the meantime this Algerian election was profoundly depressing when you consider what a regression it constitutes.

I am inspired by the Moroccan blogger Larbi to tally up the top five most “popular” Arab presidents:

– At number one, like his father unrivaled, Bashar al-Assad at 97% but only in power for a mere nine years (re-elected 29 May 2007).
– At number two, the indefatigable Zein al-Abideen Ben Ali with 94.49%, still going strong after 22 years. Like Bouteflika, he had to amend the constititution to be able to run again (re-elected 24 October 2004).
– Slipping in at third position, the hero of the hour, Abdel Aziz Bouteflika who managed an impressive 90.24% and quite a strong show for an election many were boycotting. Thus he singlehandedly reestablishes Boumediennism.
– Our very own Hosni Mubarak wins for longevity (28 years!) but has been slipping in the ranks lately, only achieving 88.5% in the last election (which, mind you, was the first to include other candidates) on 9 September 2005. Better luck in 2012 ya Hosni!
– Finally it’s Yemen’s Ali Abdullah Salah with a measly 77.2% (re-elected 22 September 2006). Let’s hope he tries harder next time.

There’s been a lot of movement in this race since the uncontested champion for most of the 1980s and 1990s, the late lamented Saddam Hussein, gave up his presidency. Will there ever be another like him, who against all odds is perhaps the world’s only politician to win 100% of the vote in a presidential election?

MERIP has a piece on the upcoming Algerian presidential elections, highlighting that now, across North Africa, rulers are in place for life:

“Until recently, Algeria was the North African exception — Article 74 of its 1996 constitution set two five-year terms as the limit on the mandate of a given president. On November 12, 2008, however, the parliament voted overwhelmingly to approve several constitutional amendments, the most important of which removed the stipulations of Article 74. This far-reaching amendment opened the way for President Abdelaziz Bouteflika to run for a third successive term, as he will do on April 9, despite his poor health and controversial performance. Algerians are convinced that, as in Tunisia or Egypt, the result of this election is a foregone conclusion.

Like Qaddafi, Bouteflika and his supporters have grounded their campaign for constitutional revision in notions of popular sovereignty. Because Algerians have elected Bouteflika twice, the regime’s story goes, they should not be hindered by a mere piece of paper like the constitution from keeping him around for life. Like its North African counterparts, the Algerian regime claims that it has jump-started economic development so remarkable that the people insist they remain in office to complete the task. Meanwhile, the removal of term limits has ended any semblance of constitutional checks and balances in Algeria.”

Amidst massive apathy and rejection of this sham electoral process, Bouteflika has an interest in getting as high a turnout as possible to legitimize his continued rule as “the people’s will.” He recently plumbed new depths, as Le Quotidien d’Algerie reports, by urging the masses to get out the vote and “make him blush in front of the foreigners”:

Yesterday, during his rally in Guelma, the president-candidate-president Bouteflika urged the populace to vote massively and to make him blush in front of international public opinion.
Yes, yes! He said this exactly: “Make my face blush in front of the foreigners by going to vote in numbers!”
In fact, the term hamrouli wadjhi in our Algerian dialect signifies exactly the opposite as the French expression. “Make my face blush” in Derdja (dialect) means “make me blush with pleasure,” that is, “do not humiliate me by boycotting this election, but rather elect me by an overwhelming majority.”
Beyond the nuances of this discourse, we discover – we knew already – that the only thing that counts for Bouteflika and the regime that has backed him is international opinion. The Algerian people are the least of his worries. [We are] a couscous republic!

Who will rid us of these decrepit old men… 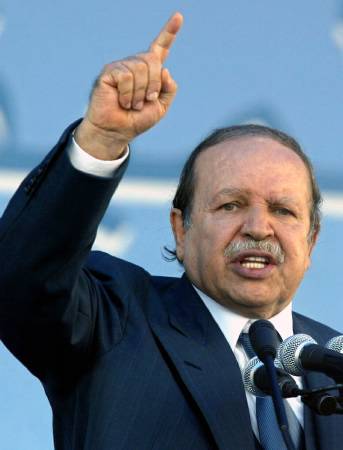 Raqs Boutef « The Moor Next Door: Algeria’s Abdel Aziz Bouteflika on the campaign trail, running for his third term as president after having amended the constitution last year to remove term limits. He faces five minor opponents with serious opposition candidates boycotting.