It’s not exactly Sudan’s biggest problem, but the government there should think of getting new copy editors. On the occasion of the fifth Sudan Population and Housing Census: 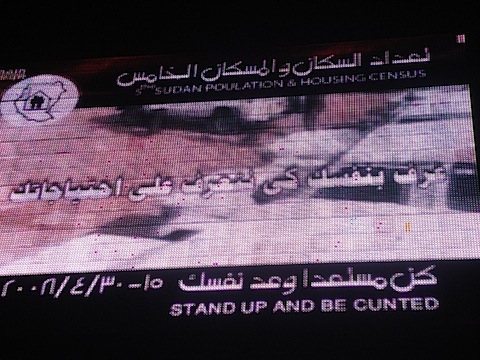 Yet in some ways it works, doesn’t it?

Turkey was thrown into crisis yesterday when the country’s supreme court moved to oust the government of Recep Tayyip Erdogan and close down his political party, the country’s biggest and most successful.

The 11-judge court, a bastion of the secularist establishment, decided unanimously to hear a case calling for the closure of Erdogan’s ruling Justice and Development party (AKP) as well as banning the prime minister and president from politics for five years on the grounds that they are trying to impose Islamic law in the overwhelmingly Muslim country of 70 million.

The decision followed a failed attempt by the country’s military leaders to mount a coup by stealth last year against the prime minister and to stop Abdullah Gul, the former foreign minister, from becoming president and head of state.

Erdogan, backed by many domestic and international politicians, argues that the court and state prosecution moves are anti-democratic and that his opponents are attempting to overthrow Turkish democracy through the courts because they cannot win at the ballot box.

“History will not forgive this,” he said yesterday. “Those who couldn’t fight the AKP democratically prefer to fight with anti-democratic methods.”

How this case turns out could have wide-ranging ramifications for Islamist movements across the region. Thus far Turkey has been a model for the peaceful and gradual integration of Islamist parties into mainstream politics, and it would be a real shame to see that country thrown into a political crisis if the AKP were banned. I don’t know much about Turkish politics, but one wonders whether this is really motivated by ideological opposition to Islamists or by the fact that the country’s secular establishment now finds itself out of power, and therefore unable to access the resources of the state for their own purpose.