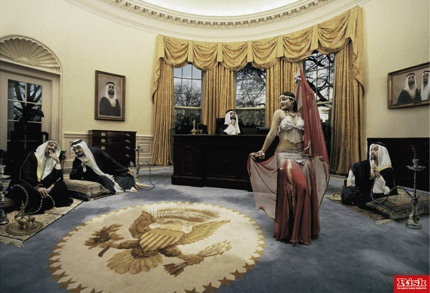 No, the above picture is neither the deluded fantasy of a member of the al- Saud family, nor the paranoid hallucination of an AIPAC staffer. It’s a picture from a new ad campaign for the old strategy board game “Risk” devised by advertising giant Saatchi & Saatchi.

I played Risk regularly in Cairo during Ramadan, when some of my Egyptian friends (Muslims and Christians) used to spending their evenings in bars must loiter at home instead (only foreigners are accepted in bars during the holy month.) So they’d make sure to stock up on booze before Ramadan begins and spend several nights a week playing all-night Risk games. (Productivity isn’t very high during Ramadan anyway, so why bother getting up early?)

It’s clear from playing Risk that the Middle East is the least desirable territory to conquer. It’s right there in the Middle and anyone who wants to expand needs to go through it at some point. Australia and South America may not get you many points, but at least they’re secure. Africa is a bit better, but still tricky. North America is probably the best place, with five points and only three places to access it. Europe is more difficult to keep hold off, as is Asia and its seven points. But the Middle East doesn’t even count as a continent and is constantly being overrun by European, African and Asian hordes — as well as the odd American passing through Africa on his way to Asia. It’s a place for war and conquest.

0 thoughts on “What if the Middle East invaded North America?”