The London Book Fair, which this year shines a spotlight on Arab literature, ends tomorrow. Here are selected links to related stories:

âœ¯ PUBLISH AND BE DAMNED – On religion and censorship for Egypt’s independent publishing houses.

âœ¯ Is the Arab world ready for a literary revolution? – Features, Books – The Independent – Essay piece from the Hay Alhambra lit festival

Al-Suriâ€™s world-view isnâ€™t original, although it is no less chilling for that: a Qutbian brew of political grievances (Israeli atrocities in Palestine, the US sanctions against Iraq), toxic prejudice (non-Muslims, but especially Jews and crusaders) and sexual anxiety (he recommends killing tourists, â€˜ambassadors of depravity, corruption, immorality and decadenceâ€™). He writes scornfully of moderate Islamists who talk with â€˜the otherâ€™ and says there is no point in pursuing dialogue with â€˜bacteria, epidemics and locustsâ€™: â€˜Only insecticides and medicines to kill bacteriaâ€™ were required. (Like the Professor in The Secret Agent, al-Suriâ€™s â€˜thoughts caressed the images of ruin and destructionâ€™.) At the same time, he advises jihadis to avoid attacking â€˜places of worship for any religion or faithâ€™, including churches and synagogues, and, if possible, to spare women and children. How he reconciles this with his call for â€˜inflicting as many human and material losses as possible on the interests of America and her alliesâ€™ â€“ or with his regret that the planes on 11 September werenâ€™t armed with weapons of mass destruction â€“ is not something he explains.

But whatâ€™s most eerie about al-Suriâ€™s book is not so much its content as its form. The Call is a military manual written in a strikingly secular â€“ at times even avant-garde â€“ idiom. His aim in writing is no different from what it was when he trained mujahedin at camps in Afghanistan: to produce better, smarter fighters, and to defeat the enemy. Most of his arguments, he emphasises, are not drawn from religious â€˜doctrines or the laws about what is forbidden (haram) and permitted (halal)â€™ in Islam, but from â€˜individual judgments based on lessons drawn from experienceâ€™: â€˜Reality,â€™ not God, â€˜is the greatest witness.â€™ Though he embroiders his arguments with the occasional quote from the Koran, he clearly prefers to discuss the modern literature of guerrilla warfare. Jihadis who fail to learn from Western sources are ridiculed for their inability to â€˜think outside the boxâ€™. Just as weirdly familiar is al-Suriâ€™s celebration of nomadic fighters, mobile armies, autonomous cells, individual actions and decentralisation, which recalls not only Deleuze and Guattariâ€™s Mille Plateaux, but the idiom of â€˜flexibleâ€™ capitalism in the age of Google and call centres. His vision of jihadis training themselves in mobile camps and houses, presumably from their laptops, is not so far removed from our own off-site work world. Guerrilla life has rarely seemed so sterile, so anomic, so unlikely to promote esprit de corps. The constraints of the New World Order make jihad a rather grim, lonely crusade, a form of private combat cut off from the movementâ€™s â€“ mostly imagined â€“ following. Al-Suri seems to acknowledge this when he says that the best kind of training occurs on the battlefield, which â€˜has a particular fragranceâ€™. On 31 October 2005, after breaking the Ramadan fast with a group of bearded men, he smelled that fragrance for the last time during a gunfight in Quetta with his former allies in Pakistan intelligence. At least one of al-Suriâ€™s dinner companions was killed but he was unharmed. There had been strict orders from above: the Americans wanted to talk to him. He hasnâ€™t been heard from since, and in spite of the objections of prosecutors like the Spanish judge Baltasar GarzÃ³n, who was on to al-Suri long before the Americans had heard of him, the CIA refuses to say where heâ€™s being held.

Read the full review which has some great bits about how al-Suri’s ideology was borne out of contempt for the Syrian Muslim Brothers, who negotiated with the Assad regime after their takeover of Hama in 1982 before being crushed.

Also see this 2006 profile of al-Suri by Lawrence Wright in the New Yorker.

Words Without Borders is running a series of excerpts from graphic novels from around the world this month, including two from Egypt and Lebanon. The fantastic Mazen Kerbaj, whose use of collage first surfaced during the Lebanon war of 2006, has an account of growing up during the Lebanese civil war: 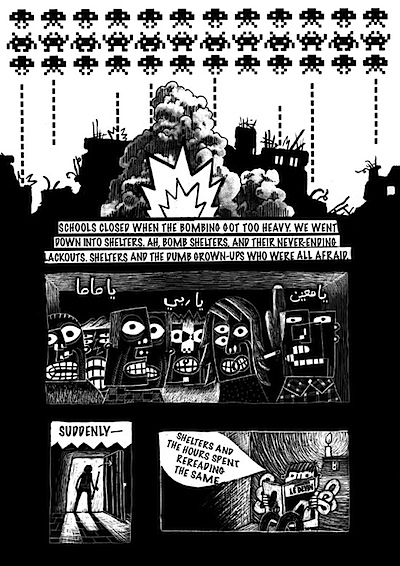 For Egypt, I also like Magdy al-Shafee’s The Metro, which shows cynical unemployed youths planning a bank robbery. He lays it on a bit thick with the obvious political references (remember to read right-to-left, as it’s translated from Arabic): 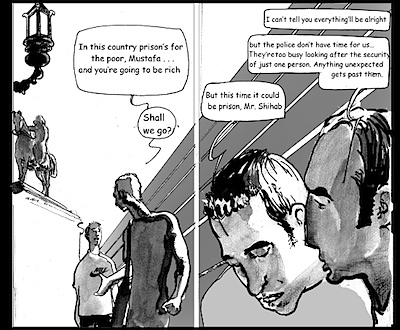 Some great Cairo shots too, as well as use of the metro. 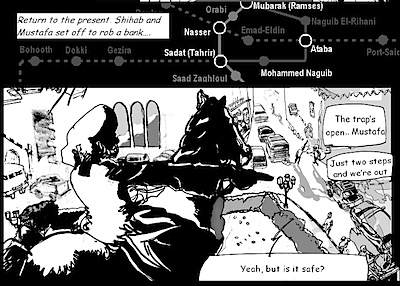 “Politics is the ordering of the household or the city as they ought to be according to the requirements of ethics and wisdom so that the multitude could be made to follow a path leading to the protection and preservation of the species.”

When the French government invaded Algeria, in 1830, it started a vast campaign of military “pacification,” which was quickly followed by the imposition of French laws deemed necessary for the civilizing mission to succeed. Women were crucial to that enterprise. In articles, stories and novels of the day, Algerian women were universally depicted as oppressed, and so in order for civilization truly to penetrate Algeria, the argument went, the women had to cast off their veils. General Bugeaud, who was charged with administering the territory in the 1840s, declared, “The Arabs elude us because they conceal their women from our gaze.” Algerian men, meanwhile, were perceived to be sexual predators who could not control their urges unless their womenfolk were draped in veils. Colonization would solve this by bringing the light of European civilization to Arab males, who, after a few generations of French rule, would learn to control their urges. The governor-general of Algeria remarked in 1898 that “the Arab man’s, the native Jew’s and the Arab woman’s physiology, as well as tolerance for pederasty, and typically oriental ways of procreating and relating to one another are so different from the European man’s that it is necessary to take appropriate measures.” As late as 1958, French wives of military officers, desperate to stop support for the FLN, which spearheaded the war of liberation against France, staged a symbolic “unveiling” of Algerian women at a pro-France rally in the capital of Algiers.

Decades later, millions of French citizens with ancestral roots in North Africa are being told much the same thing: in order to be French, they must “integrate” by giving up that which makes them different–Islam. The religion, however, is not regarded as a set of beliefs that adherents can adjust to suit the demands of their everyday lives but rather as an innate and unbridgeable attribute. It is easy to see how racism can take hold in such a context. During the foulard controversies, it did not appear to matter that 95 percent of French Muslims do not attend mosque, that more than 80 percent of Muslim women in France do not wear the headscarf or even that the number of schoolgirls in headscarves has never been more than a few hundred. The racist notion of innate differences between French citizens of North African origin and those of European origin defined the debate. For instance, the Lévy sisters were sometimes referred to in the press as Alma and Lila Lévy-Omari, thus making their ancestral link to North Africa (on their mother’s side) clearer to the reader.

Do read more of Leila Lalami’s excellent review of The Politics of the Veil, but the point highlighted above as always struck me as extremely important. Unfortunately, French authorities — notably Nicolas Sarkozy when he was minister of the interior — have chosen to empower religious fundamentalists and depict them as representative of the Muslim community at large.

Readers may be interested in reading this profile of Egyptian novelist Alaa al-Aswani from last week’s Le Mondes des Livres, accompanied by a review of the recently launched French edition of his last novel, Chicago.
We had mentioned Chicago when it came out earlier this year, while Baheyya had reviewed it. 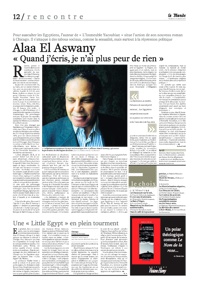